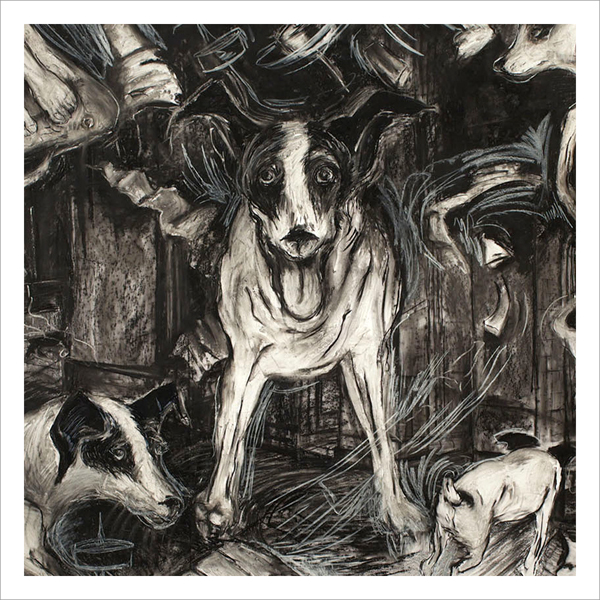 IT’S BEEN THREE YEARS since Bowie left the world and the world began to fall apart (a notion that began as a quip on Twitter, but which becomes less funny, and more true, as the years go by and the evidence only grows).

But it’s not the first time he disappeared. For a big chunk of me being a grownup — basically, from 2000 on — it was like he didn’t exist. One forgettable album followed another until he faded away altogether, almost without me noticing.

And then he was suddenly back again. As one reviewer personified it, this was “Prospero-Lear Bowie, the old man rising to prove he still had command of his magicks, and to roar against the onrushing void”. I thought it was the beginning of something when it turned out to be the end.

But unlike before, now that he really, truly is gone, he’s never too far from my mind.

So, even though this is the first one of these year-end mixtapes not to include any of his music (not even the odd cover version), he still hangs over almost everything here.

But anyway, first up, some pre-millennium, NYC samurai/hitman jams…

It was the Year of the Dog, dawg. So, I’m sprinkling some Ghost Dog vibes throughout. It’s been almost 20 years since I first watched it in the theatre, but happy to report the movie still holds up.

My favorite album of the year by far was The Stereography Project, which is based on the music of two indie singer/songwriters, rearranged and reinterpreted for jazz orchestra by van Dijk. The album’s first half features the songs and voice of Jeff Taylor. The second half, Katell Keineg. This is a Keineg tune.

This Jeff Taylor song is also on the van Dijk album and is one of my favorite tracks from it. But I’m including the original version here, so that we get to hear Blackstar drummer Mark Guiliana do his simple, perfect, ridiculously jaunty drum part. (Hot take: the hand claps might be the snazziest hand claps in any song ever. I’m sure I’m not thinking of something, but still, come at me, bro.)

Eckroth’s album was produced by Blackstar bassist Tim Lefebvre (her husband) and also includes a cover of Bowie’s “Love Is Lost”. But I like the vibe of this track best.

Beyond Now, McCaslin’s first solo album after Blackstar, had two Bowie covers. His latest, Blow, has none. But Bowie’s spirit feels even more present on it — not because it sounds like Bowie, but because it sounds unlike anything McCaslin has done up to this point:

As [McCaslin] and his band toured to promote material, lessons from Blackstar only became clearer to everyone involved with those recording sessions.

“The influence is more of a ‘do what you want’ vibe that David imparted on us,” said Lefebvre. “Just be brave and don’t worry about what people think. Just do what you feel.”

Though, the Bowie connection is a little more immediate on this particular track because of the presence of Gail Ann Dorsey, whose performance of “Lazarus” with McCaslin was one of the highlights of the many Bowie tributes over the years.

Watching Akira again on its 20th anniversary, the music stood out for me as much as the animation. And this moment in the film remains wonderfully weird because of both.

A little random — Iggy crooning latter-day Yoko Ono. Here he is in the Telegraph, talking about the record company’s reaction to his album Après, a collection of cover songs, many sung in French:

“They would have preferred that I do a rock album with popular punks, sort of like ‘Hi Dad!’ I was not going to do that!” the 65-year-old American quipped at a press conference for the record launch in Paris last night.

Though he went it alone in creating the record, Iggy Pop was contractually obliged to offer it to his longtime label Virgin EMI.

It’s also the second time this year that I gleaned an overlooked gem from the interstitial music of a favorite baseball podcast. (The first was T. Rex’s Dandy in the Underworld.)

As usual, Brian Eno is everywhere, on everything. But apparently, so was Phil Manzanera. In the mid-70s, he played guitar on some of my favorite Eno and John Cale albums, which are lumped together here with Manzanera’s own Diamond Head, also featuring Eno:

As Roxy Music went from peak to peak, Cale joined the band’s own disruptive force and their guitarist for a series of albums that they treated as interlocking hotel suites: Phil Manzanera’s Diamond Head, Eno’s Here Come the Warm Jets and Taking Tiger Mountain (By Strategy), and [Cale’s Fear].

Led by Blackstar keyboardist Jason Lindner, this album, the first without Guiliana on drums, sparkles.

Except for a few thumps, Guiliana doesn’t really appear on this, either, even though he wrote it. Instead, this single, which was released on what would have been Guiliana’s mom’s 76th birthday, is performed by Brad Mehldau.

I remember being a little befuddled by Schneider and Bowie’s “Sue (Or in a Season of Crime)” when it first came out. The lack of hooks or refrains wasn’t what I was used to from rock or big band jazz. I didn’t realize that the intrigue of her pieces is that they constantly build and evolve. Nothing’s ever repeated, by design.

(This also includes Ben Monder on guitar, so all the Blackstar folks are represented in this year’s mix.)