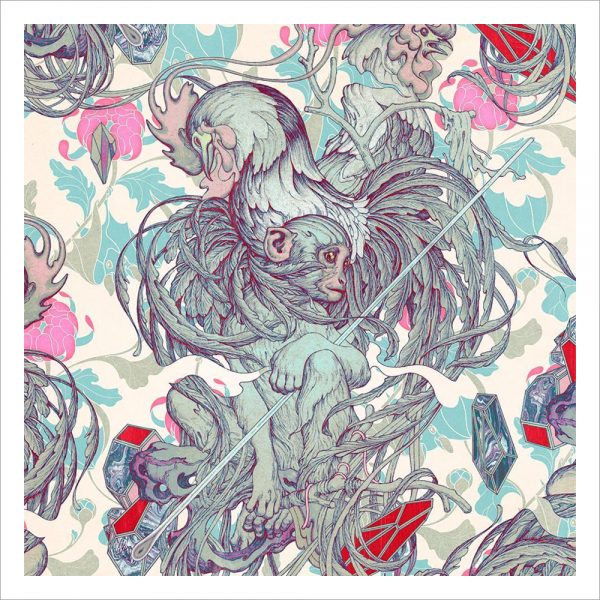 SO, THE WORLD DIDN’T END — though, not for lack of trying.

But before jumping into next year and resuming the daily, emotional Peloton of outrage, despair, escape, and exhaustion — here’s a 50-minute respite, eleven songs that I discovered, rediscovered, or put on repeat in 2017.

More like a quiet interlude than a “best of” list, this year’s mix is tidier than last year’s, with fewer, shorter tracks. And even though it wanders from 19th-century French poetry to shoegazing black metal to oddball Hollywood musical, it’s also more cohesive. (Well, to me, at least.) Most of the picks are collaborations and/or covers. Bowie still bookends (and overshadows). Matt Johnson makes a comeback. Eno and Cale are always hanging around. And while the love songs seem somewhat anachronistic today (more desperate than romantic), the death songs feel as relevant and immediate as ever.

So, here I count my end-of-year blessings, one through 10 — plus a bonus track — an upbeat coda to 2017, in which we can drink a lot of wine and pretend everything’s fine, despite all the news we’re carrying.

David Bowie & Nine Inch Nails, “I Can’t Give Everything Away (Farewell Mix)” (2016)
Anonymously released with DB’s vocals last year on SoundCloud. Performed live by NIN over the summer. Blackstar bandmates Tim Lefebvre and Jason Lindner both give Reznor’s tribute a thumbs up.

The The, “Everybody Wants to Go to Heaven (But Nobody Wants to Die)” (2015)
After a decade hardly making any music at all, Matt Johnson has mostly been composing soundtracks since 2010. This was written for the 2014 movie Hyena, directed by his brother, Gerard Johnson.

Hector Zazou & John Cale, “First Evening” (1992)
John Cale turned 75 this year and remained as difficult to pin down as ever. This particular oddity, part of an ambient concept album based on the poetry of Arthur Rimbaud, is 25 years old and still has it going on.

Deafheaven, “Irresistible” (2013)
No. 94 on Rolling Stone’s list of “The 100 Greatest Metal Albums of All Time.” When the list came out over the summer, I plucked this album from the rest because of the awesome cover art, like it was 1997 and I was browsing the bins at Tower Records.

The The, “We Can’t Stop What’s Coming” (2017)
The first proper The The song in over a decade. Officially released at this year’s vinyl shitshow (aka Record Store Day). Features Johnny Marr, James Eller, and Zeke Manyika. Written in memory of Matt Johnson’s brother, the great Andy Dog.

Harry Nilsson & Shelley Duvall, “He Needs Me (Demo)” (1979)
I missed a chance to rewatch/reappraise Robert Altman’s Popeye when it played at the Metrograph earlier this year. As a kid, I remember being weirded out by its adult tone. As an adult, I think I might adore Shelley Duvall more than ever.

Michel Legrand & Tony Bennett, “Watch What Happens” (1964)
I had no love for January’s multi-Oscar-winner, La La Land. But The Next Picture Show paired it up with Jacques Demy’s The Umbrellas of Cherbourg, so that led me to finally watch that, and it is wonderful. This is Tony Bennett’s rendition of one of the songs, with English lyrics by Norman Gimbel. Here’s a crappy YouTube version of the original, which has totally different lyrics/meaning in the movie.

Brian Eno & John Cale, “Spinning Away” (1990)
In October, Chris O’Leary wrote an in-depth review of Wrong Way Up, one of my all-time favorite albums. Featuring some of Eno’s best singing, it’s unexpectedly upbeat (especially for Cale) and largely overlooked — possibly because it also has one of the all-time ugliest album covers.

Mark Guiliana Jazz Quartet, “Where Are We Now?” (2017)
I gained a new appreciation for this song while watching Michael C. Hall perform it in Lazarus. And I think Guiliana’s quartet does a great job capturing the essence of it, as well — letting the song fall away to almost nothing in the middle before building up to the monumental end.

Bruce Dickinson, “All the Young Dudes” (1990)
Bruce and Janick introduced me to this song even before Bowie or the Hoople did. I think this version still rocks. And the dorky music video makes me irrationally happy.

Great stuff that didn’t quite fit the mix, but all are definitely worth checking out.

John Cale, “The Queen and Me” (1991)
O’Leary’s review of Wrong Way Up was a warren of rabbit holes for that time period. Also overlooked back then, likely overshadowed by Cale’s more famous Leonard Cohen cover, is this equally transformative take on Cohen’s “Queen Victoria”.

De Beren Gieren, “Weight of an Image” (2017)
Caught this kooky jazz tune during the Bimhuis Radio broadcast of a Mark Guiliana show. The DJ said that the Flemish band name, translated into English, “must be something like ‘the bears are laughing out loud.’” Then she added, “Nobody knows why this trio has this name, and they won’t tell us.” Fair enough.

Mark Guiliana Quartet, “inter-are” (2017)
I worry a little that McCaslin/Linder/Lefebvre/Guiliana (and Monder) will forever be branded as Bowie’s last band, overwhelming their identities as individual artists. So maybe I shouldn’t have picked Guiliana’s Bowie cover for the mix, especially when Jersey was my all-around favorite album of 2017. Anyway, here’s the album opener — I particularly love the Reich-like handclaps at the end of it. (Hello again, Steve Reich?)

Town Portal, “Yes Golem” (2015)
Another solid recommendation from metal guru MathRawk, this trio of proggy Danes saved me from a bad music day at the office, where they like to pipe in “Hotel California” overhead on repeat, the open plan version of the world’s most uncool Gap.

Garden of the Ark, “Undone” (2017)
Speaking of MathRawk, his band just released a kick-ass four-track demo (“Heavy seventies meets noisy nineties”). The phrase “two peas in a pod” has never sounded so anguished.

PJ Harvey, 1995 TV Performances (1995)
Or, actually, forget everything I posted above. To take your mind off present-day troubles, just transport yourself back to 1995, and watch the coolest person on the planet do her thing for an hour.